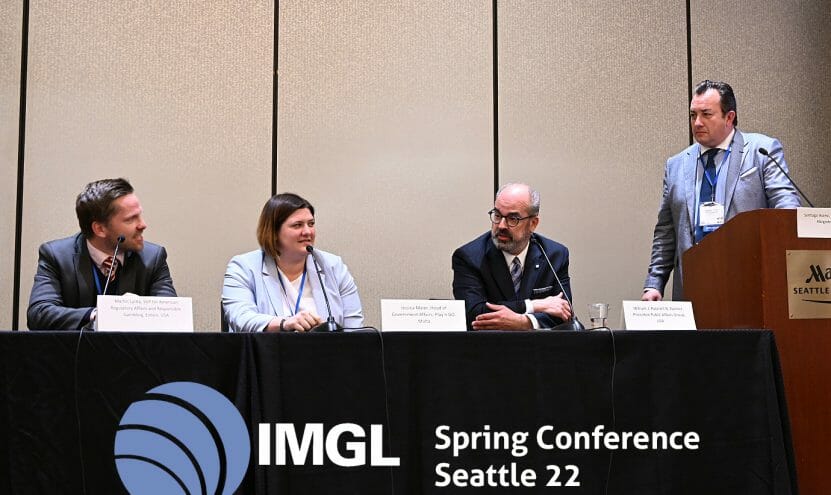 Responsible Gaming is the only sustainable future for the industry

Only those companies that take responsible gaming seriously will survive in the regulated markets of the future agreed a panel of industry representatives led by Santiago Asensi. The group which included Entain’s SVP for American Regulatory Affairs and Responsible Gambling, Martin Lycka, Bill Pascrell of the Princeton Public Affairs Group and Jessica Maier of Malta-based […]

Only those companies that take responsible gaming seriously will survive in the regulated markets of the future agreed a panel of industry representatives led by Santiago Asensi. The group which included Entain’s SVP for American Regulatory Affairs and Responsible Gambling, Martin Lycka, Bill Pascrell of the Princeton Public Affairs Group and Jessica Maier of Malta-based Play’n GO were speaking at the International Masters of Gaming Law (IMGL) spring conference in Seattle.

There was a time when the casino industry identified its problem gamblers and called them VIPs: that approach won’t continue to work in online gaming. The tools are available to identify gaming addicts and intervene with regulators increasingly looking to the industry to put its house in order. Initiatives like the Single Customer View in the UK and attempts elsewhere to promote responsible gambling through data sharing are signs of what is coming, the panel predicted.

The first step would be to promote the national self-exclusion schemes that exist in many countries but which are poorly advertised. Then there are a couple of steps which will be needed before the technological possibilities can be rolled out in practice. First, the potential hurdle of Europe’s GDPR regulation will need to be overcome. When it is there will need to be a common understanding of what constitutes a marker of potential harms.

The session concluded with a hope that those members gaming industry who make responsible gaming a core part of there value will reap a regulatory reward for there efforts. At a time when sports betting in particular is burgeoning in the US and North America, it is essential for operators to be ahead of regulators in protecting its customers of the future.

Asensi partner Alla Serebrianskaia was also participating in the IMGL conference. She led a roundtable discussion on legal restrictions to the marketing and promotion of gambling.

News
Course at the Portuguese Catholic University
Event
Responsible Gaming is the only sustainable future for the industry
Article
Wounds sustained by the Spanish gaming industry may never heal
Article
Colombia is breaking records and leading the way as the first Latin American country to regulate online gambling.

Start your journey with Asensi

Contact the legal pioneers and most trustworthy team of lawyers in the gaming and gambling industry in Spain.

Contact Us
We use cookies on our website to give you the most relevant experience by remembering your preferences and repeat visits. By clicking “Accept All”, you consent to the use of ALL the cookies. However, you may visit "Cookie Settings" to provide a controlled consent.
Cookie SettingsAccept All
Manage consent

This website uses cookies to improve your experience while you navigate through the website. Out of these, the cookies that are categorized as necessary are stored on your browser as they are essential for the working of basic functionalities of the website. We also use third-party cookies that help us analyze and understand how you use this website. These cookies will be stored in your browser only with your consent. You also have the option to opt-out of these cookies. But opting out of some of these cookies may affect your browsing experience.
Necessary Always Enabled
Necessary cookies are absolutely essential for the website to function properly. These cookies ensure basic functionalities and security features of the website, anonymously.
Functional
Functional cookies help to perform certain functionalities like sharing the content of the website on social media platforms, collect feedbacks, and other third-party features.
Performance
Performance cookies are used to understand and analyze the key performance indexes of the website which helps in delivering a better user experience for the visitors.
Analytics
Analytical cookies are used to understand how visitors interact with the website. These cookies help provide information on metrics the number of visitors, bounce rate, traffic source, etc.
Advertisement
Advertisement cookies are used to provide visitors with relevant ads and marketing campaigns. These cookies track visitors across websites and collect information to provide customized ads.
Others
Other uncategorized cookies are those that are being analyzed and have not been classified into a category as yet.
SAVE & ACCEPT